Time for another fun countdown. We are picking superhero costumes from the past that we miss and we'd like to see come back. Joining me are Leave Your Spandex @t The Door's Manolis, Hell Is A Land Without Comicbooks' Hellboy and Sadly, Cairo's King Mob.
If you don't see your favorite remind us in a comment. Enjoy! :D 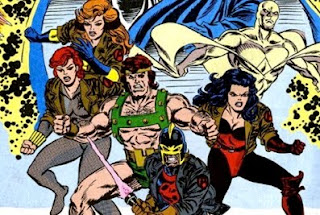 10- The Avengers' jackets.
Come on! They were kinda cool. Kinda? 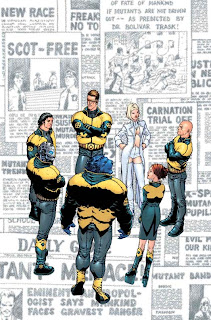 9- New X-men outfits.
The "leather look" done right. Not too superhero-y but neither bland and boring like the movie outfits. 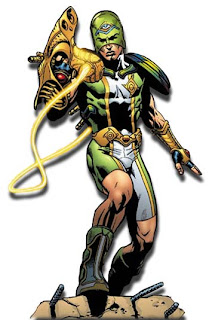 8- Marvel Boy's first costume.
Cause he was the only one who ever pulled off a short pants superhero outfit. 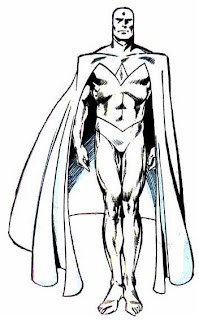 7- Vision's white version.
If you want him to look creepy... he never looked creepier than that. (I could live without the open toes though). 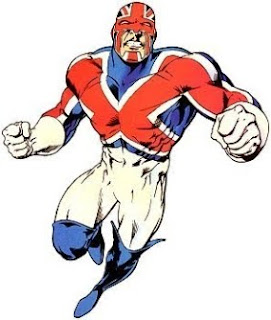 6- Captain Britain's classic costume.
He looks so unique. And I like the creative use of the flag's design. 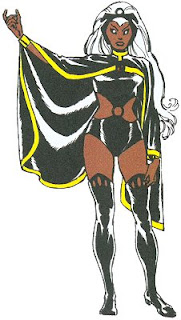 5-Storm's original costume.
Cause it's the sexiest superhero costume of all time. Plus, it fits the character. 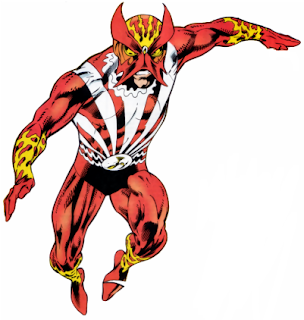 4- Sunfire's classic costume.
It's a beautiful, bold design with a unique, amazing mask. Bring it back. 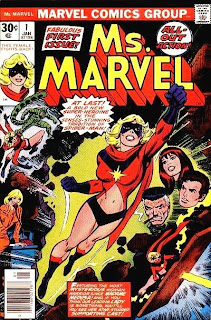 3- Ms.Marvel's original costume.
I know we saw it recently on Moonstone but I love it so I'm counting it. Ha! 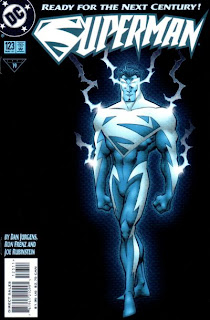 2- Superman's electric blue costume.
Ok, not for Superman himself but it's such a nice costume with an interesting color scheme. Why not have Superboy use it? Won't it be better than this boring shit. 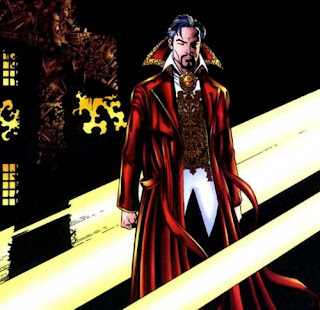 1- Dr. Strange's trenchcoat
Cause he never looked better. I loved this look and it only lasted five minutes. It's a shame. A perfect balance between a superhero outfit, magician's robes an civilian clothes. 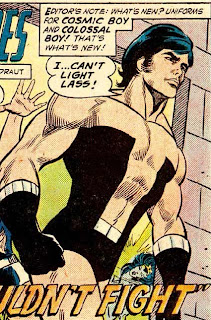 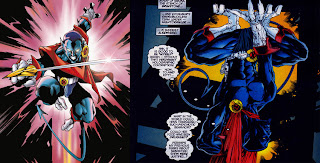 9- Nightcrawler's Carlos Pacheco look (debuted in Excalibur #98).
Hotcha! a risqué (and a bit piratey) take on the classic costume. plus: crop hair, piercings and a goatee! But it totally worked.

8- Wasp's George Perez white costume (debuted in Avengers #195).
Sure she’s changed a gazillion costumes over the decades, usually even between issues, but this still remains my fave, followed by the classic retro original. So 80s! 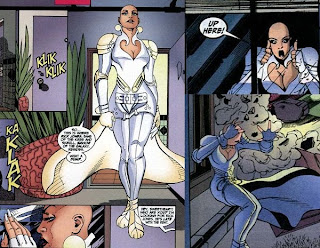 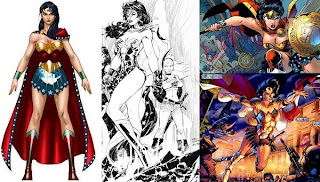 6- Wonder Woman's warrior look.
Well, honestly, any WW costume but the current one would be awesome. Ironically enough, my absolute fave WW costume is the armor version that Donna Troy wore for 5 or so pages in Gail Simone and Terry Dodson’s recent WW #1 and was recently remodified for the DCU Online game 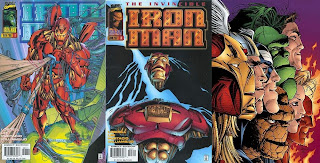 5- Iron Man's Heroes Reborn armor (debuted in Heroes Reborn Iron-Man #1).
I love that faceplate! I even love the whatever-they-ares jutting out of his back with the smoke coming out. Reminds me of my also fave black stealth suit from the first Armor Wars, with the ginormous detachable jet turbines. What can I say, I’m all about the accessories. 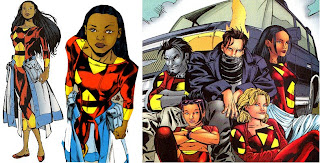 4- Monet St Croix's Steve Pugh costume (debuted in Generation X #63).
I love all of Pugh’s Generation-X Counter-X designs really. Monet’s really stood out though with those white cargo-skirt attachments on the side of her standard uniform. I just adored the concept, and the new partial X-logo on the front. Skin’s came with actual cargo pants, Husk’s with a pull-me slip of fabric hanging out in the front, Jubilee’s with a fun jacket, Chamber’s was black leather-tastic. I’ll shut up now. 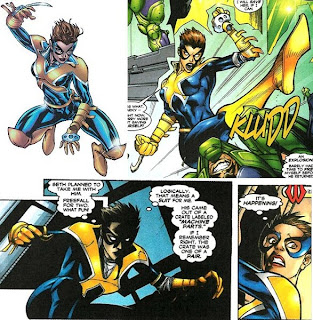 3- Shadowcat's Leinil Francis Yu costume (debuted in X-Men v.2 #100).
I love the short hair, and the little mask, and the shirt collar coming out of the collar of the new uniform X-design, even the little left-over Wolverine bone claws that Claremont has since become obsessed with. Kitty’s the only one who made that design work. Fun!


And the one costume I NEVER wanna see again: 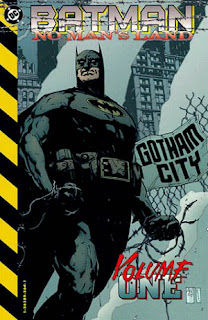 10- Batman's black costume.
Last seen in the "No Man's Line" storyline. Now with "Batman Inc." someone could bring it back.

9- Iron Man's classic armor.
It still looks beautiful. Let them find a reason to bring it back. It could need maintenance or something. 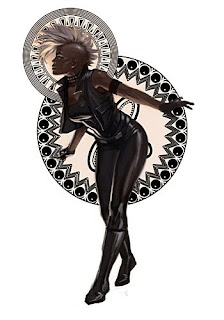 8- Storm's mohawk look.
Yeah, I know many of you didn't like it. But back then it felt like Storm had character. So: she divorces Black Panther, dresses like that, moves to Louisiana becomes a fan of Baroness and Kylesa and fights racists. I'd buy that comic.

7- Green Goblin's classic costume.
When he was Joker's equivalent for Spider-man. 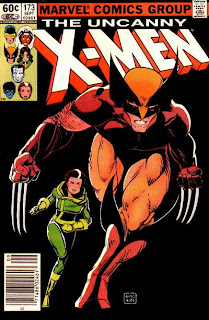 6- Wolverine's brown costume.
Only in biker clothes he looks better. 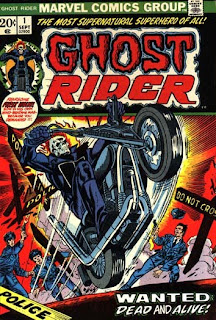 5- Ghost Rider's original costume.
Much better than the over the top looks that followed. 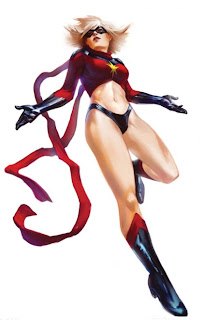 4- Ms.Marvel's original costume.
I know, her regular costume is pretty good also and this one was also worn by a supervillain. But it'd like to see it on her again. 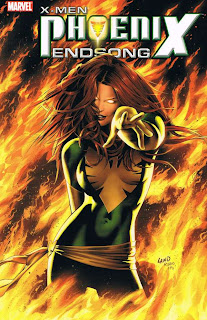 3- Phoenix's original costume.
No need to say more. Even if she'd have to came back from the dead one more time. 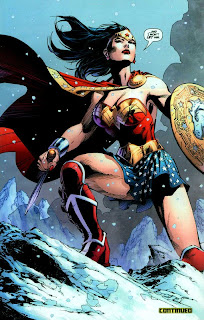 2- Wonder Woman's look from "Superman For Tomorrow".
A cross between her regular costume and a greek armor. I wish when she gets bored of pants and jackets she goes back to this one. 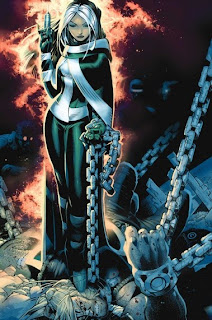 And the one costume I NEVER wanna see again: 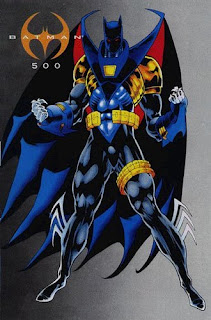 KING MOB'S TOP FIVE
It was fun searching but I couldn't find ten costumes. Truth to be told, despite fanboys bitching, most of the times a new outfit is an improvement on what was before. E.g. Wolverine's costume in Astonishing X-men is a compilation of good elements from all the outfits he's worn, or Iron Man's armor keeps evolving beautifully, or Thor's current one may very well be the best he's ever worn. But I did find enough for a top 5!

5- Sunfire's classic costume.
It fits the character, incorporates beautifully the japanese flag in its design and I love the unique mask. It was designed in the 60s and was used for a long time until it was replaced with this piece of crap. 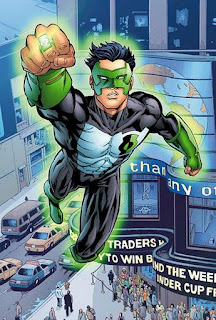 4- Kyle Rayner's Green Latern costume.
I think it was a pretty original approach to Hal Jordan's costume that I never liked. I may be that that was the only time that I read Green Latern comics. Or that Kyle Rayner was an important part of Morrison's JLA.

3- Havok's X-factor costume.
Rolled up sleeves 80s style, cool 90s vibe with leather jacket and wild hair while at the same time is the forerunner for the 00s New X-men design. I loved the idea that in Peter David's X-factor everyone wore similar outfits except the self-absorbed Quicksilver. 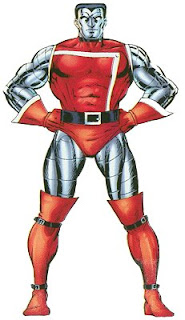 2- Colossus's red costume.
I wonder why they didn't keep it. Was it too "CCCP"? (It's not like it was like this one!). Did it look too evil? I like the buttoned chest, the gloves are an interesting addiction, in all a minimal, stylish look. 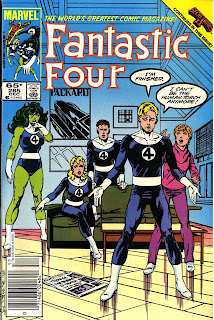 1- Fantastic Four's black and white costumes.
FF costumes are meant to be simple and functional. Not much you can do fashion-wise. But when John Byrne took over the title he used the Unstable Molecules consept and with the help of the Negative Zone he did the most subtle costume change ever. Light blue became black with blue hightlights and the black collars became white. I don't get what the countless redesigns that followed ever hoped to achieve...

And the one costume I NEVER wanna see again: 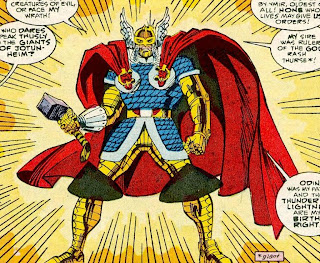 -Thor's golden armor.
I mentioned before Thor's current costume... Well, he once wore one of the worst outfits of all time. The proud God Of Thunder sports a mask and more gold than a Byzantine emperor. Not that this one was any better but it's a 90s outfit and you expect them to be bad.
Αναρτήθηκε από ilias kyriazis στις 2:36 PM

Glad to see it's not only me that wants WW back in an older style!

My worst costume is the worst of all, thank you very much.

hellboy's worst costume shouldn't count cause it's supposed to be bad :P

where do you get the fabric from? I want to have X-Men Costume and Ive been to several halloween stores and craft shops, and no one had any idea what I was looking for..