My new graphic novel, FALLING FOR LIONHEART, has been solicited in Previews!
It's coming this October from IDW so order your copy now and make me happy :).

Check my site for more info and sample pages.

Falling for Lionheart
Ilias Kyriazis (w & a & c)
Lionheart, the world’s greatest, toughest super hero is on top of the world... publicly. With the out-of-control parties and girls throwing themselves at him, you’d think he’d be happy. But the one girl he loves, the woman he put on a pedestal, is the team tramp. Swimming in his bad mood, Lionheart meets someone else. Someone who shares his interests. Maybe he’d give her the time of day if he could take his eyes off that tramp...
TPB • FC • $19.99 • 112 Pages • ISBN: 978-1-60010-829-7
Expected in-store date: October 6, 2010
© 2010 Ilias Kyriazis

Email ThisBlogThis!Share to TwitterShare to FacebookShare to Pinterest
Ετικέτες falling for Lionheart, my comics

For those of you that didn't get to see the minicomic I did for SDCC 2009 you can now read the whole thing on my site.
Αναρτήθηκε από ilias kyriazis στις 3:21 PM No comments:

Email ThisBlogThis!Share to TwitterShare to FacebookShare to Pinterest
Ετικέτες my comics 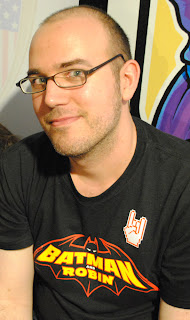 here's a small interview I did for the Eye Candies blog. :)
Αναρτήθηκε από ilias kyriazis στις 5:06 PM No comments: